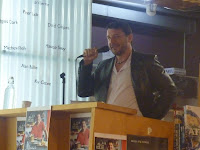 Shearer’s had a flirtatious evening Wednesday night with Manu Feildel of Sydney restaurant, L’Etoile and of course, from the ever-popular TV programme My Kitchen Rules.

After teasing the crowd with an early appearance in the store, Manu started the event with a sexy “Bonjour” that prompted great murmurings of anticipation and excitement.

He spoke with humour and honesty about his life working in kitchens and interacted with the audience in a relaxed and intimate manner, often referring to audience members as “darling”, which was greatly appreciated.

When Manu’s mother prompted him to get a real job after some years working in a circus which he joined when he was 13, he started work with his father in Brittany. He moved to England when he was 18, with not a word of English. Not being smitten with England’s dour weather, he searched out sunnier climes and landed in Melbourne, which was then the food capital of Australia. He moved permanently to Sydney after being “gobsmacked” by its tremendous beauty – particularly that possessed of the local women. “Women everywhere – whoah!”, exclaimed Manu.

He found work at Hugo’s, but after sensing a change in the patronage, opened his own restaurant, L’Etoile in Paddington. He now owns another restaurant, Apperitif, which only recently opened with Miguel Maestre in Kings Cross.

He wryly described his early forays into television, particularly that of his experience with MasterChef. He made light of how much the producers must be regretting their decision not to choose him for the programme because of his French accent. Of course, he is now a huge part of the success of My Kitchen Rules with Pete Evans.

Question time was great fun and Manu was extremely open in responding to questions as varied as “Who would you share your last meal with” (No-one. I never share my food) to “What is it like working with Pete Evans” (He talked about their separating of ways when at Hugo’s, but reassured us that they are great mates). However, what he would not reveal was who had been eliminated from the My Kitchen Rules Wednesday night challenge.

It took him 8 months to put together Manu’s French Kitchen and he talked of becoming an author as the “sugar on the cake”. Manu said that he wanted people to become less afraid of French cooking and so wanted to put together recipes that people could use everyday. 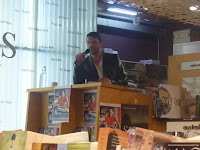 He promised to give every person who bought Manu’s French Kitchen a kiss – “even the boys”, which was widely taken up by those present.

On a rainy French Film Festival night in Leichhardt, Manu warmed the hearts and fired the belly, kissed our cheeks and bade us all “darling”.  What more could you want? 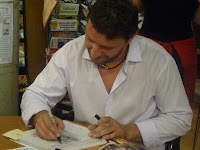