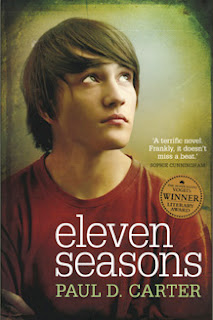 Last night Paul D. Carter was awarded the 31st The Australian/Vogel’s Literary Prize for his manuscript Eleven Seasons.
Paul dropped into the shop on his way to media interviews and Barbara had a chat with him…

With the window display, copies already at the counter and customers coming in asking for the book written by the man they heard on the radio this morning, Paul was a little overcome with his first visit to a bookshop since winning the award. One of our customers, Paul’s first sale, beat him in the shyness stakes though, being too shy to come and meet him. 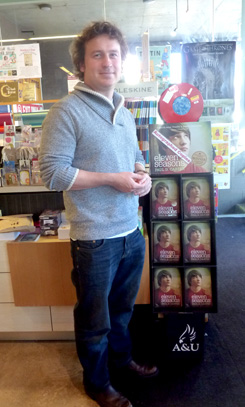 The life of the book’s main character, Jason Dalton, is influenced by his love of AFL football and while that may be off-putting for some, Sophie Cunningham, one of the Vogel judges, commented last night that the three judges had no real interest in AFL but Paul’s writing and narrative skill takes over.

Being a staunch St Kilda supporter, I asked him why he decided to use AFL as the background for his novel when it could divide readers. Paul said he got the idea from Don DeLillio’s Underworld where the background to the story is a baseball match and where the characters actions and reactions are heavily influenced by baseball. I think, though, that Paul’s writing and this book have much more in common with Craig Silvey and his novel Jasper Jones because, despite being an AFL tragic and recognizing the names, I’m also completely pulled into the story of Jason. 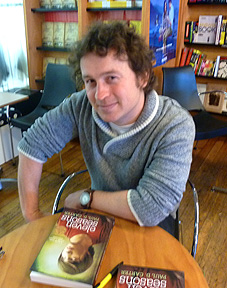 I asked him, knowing that there were 150 entries in the 2012 The Australian/Vogel Prize was there anyone who had suggested he enter. Paul admitted that he first entered the Vogel when he was 20 years old and has always secretly harboured the desire to win.

Paul teaches at a co-ed school in Melbourne’s western suburbs and I wondered if his students had read the book. He said that they hadn’t read drafts but they were aware he was writing a novel.  I’m sure, that by next week, there will be a lot of his students buying Eleven Seasons to get brownie points!
Posted by Shearer's Books at 16:32