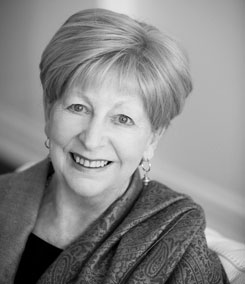 What do you think makes the legacy of Douglas Mawson and the other Antarctic explorers so enduring?
Well, that is a loaded question when you're talking to me, because my whole thesis is that Mawson went to the Antarctic and is remembered, but there were 30 other men who went down there too, they have been forgotten, if they have ever really been known. And Mawson is a great man, let us not dispute that. Great organisationl skills, courage and determination, but he had a lot of perosnal failings. One of the was that he would not stand for competition.

It was miserable of him really, to not acknowledge two people in particular, that's Captain John King Davis, the man who captained the Aurora, and also not to acknowledge Frank Wild, who left the 8 man base in the complement that included Charles Turnbull Harrisson, whose diary I have transcribed. And he made no effort to get the men known. However I see that 100 years later as my mission in life, to make people aware of these 30 mostly very young, very brave and quite wonderful men. They had very inadequate equipment, clothing, information, no communication and I think it is very sad that they have been lost to Australian history, because Australian history is a big picture and there is room for these men.

Tell us about your book, Mawson's Forgotten Men.
I think it's an important book for the reason I've said. I also think it's a wonderful book - now I can say that because I didn't write it, I only edited it! It's the diary of Charles Turnbull Harrisson who was one of the complement of that 8 man party that was landed 2000 km to the west of the main base. As someone else has said, perhaps their problem is that they were too good - nothing went wrong, nobody was killed or lost, they went through tremendous bizzards and hazards, what they did was quite amazing. But they have been lost to the public and I would like to bring them back.

The other thing about this diary is that in the Mitchell Library there are not only these two little black volumes, which is the handwritten diary, but there are also his artworks, quite a lot of them. So it's an exceptional record in that you have the pictorial and the literary and they complement each other. I have to say that the publisher has done a great job because they have put the images where the diary is discussing them, not in a group in the middle which is where you often get them. The other thing about that diary is that it's not only cold and courage, there's an underlying narrative with his anxiety for his two young children. 100 years ago children died a lot more than they do now and he was constantly worried about them.

The other narrative is about his wife. Really, it's a 520 page love letter to his wife, she's there the whole time, she's evoked, remembered and constantly addressed. He didn't write that diary for me to read or for you to read, it was his letter to her and what makes that so poignant is that he came back from the Antarctic in March 1913, and he then was lost at sea in December 1914 -  just 18 months later. It was a terrible tragedy so you can imagine Carrie, his wife, going through those two little books, looking at his sketches and taking comfort from them. It was 14 years before she was able to part with them and she gave them to the Mitchell Library and that is why we have this record today. I have brought it out into the public because it's such a beautiful record and I think people will enjoy it and empathise with him. It's beautiful, he's such a good writer and his sketches are more than adequate, they're artworks.

How did you come to edit and publish this book?
It's Patrick White's fault! Not that I ever knew Patrick White, but I was reading David Marr's biography of Patrick White and I came across a name - Herbert Dyce Murphy - in a context I didn't understand. He's a very distant connection of mine. So out of curiosity I thought, there's more to this man than my family ever told me. So I started being curious. I went to the library and discovered that he'd been second in command to Mawson at the base, and so I kept on going and realised I was writing a biography of him, which was very exciting, and that's when I discovered these diaries.

I had no interest in the Antarctic before, but those diaries those men wrote were so beautiful. They were a release valve, a saftey valve, they could write things in there that they couldn't say - not that there were too many tensions at the western base of which Harrison was a part, nonetheless there were slight niggles that could be acknowledged in that form but otherwise had to be suppressed. But the men came across as such remarkable human beings that I always wanted to know more. I was saying something along the lines of how remarkable these diaries were to Elizabeth Ellis (the Mitchell librarian) and she said "well you, (meaning writers), are the voice of the collection". So that was a bit of a challenge wasn't it? And the diary that had really moved me the most was Harrison's because of what I said abut the narrative and awful conclusion. 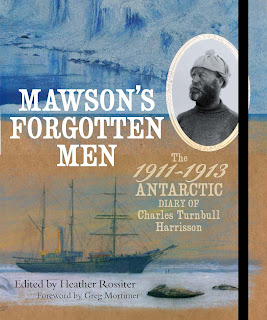 I only just realised this but I have tremendous empathy with Carrie because I was also left a widow with a six year old and a four year old so I understand what she went through. So whether that made any difference unconsciously I don't know. Anyway, that's the one I chose to transcribe and it wasn't easy - so many words, over 240,000 which I edited to 150,000 the reader will be pleased to know. But of course, the writing  is so small and it's a real challenge to transcribe that.

How long did the process take?
It was 4 years from go to whoa. I spent the first year trying to get a publisher. I said, I'm not going to  do any work until I've got a stitched deal. I realised that I couldn't get a publisher until I'd transcribed  at least part of it. It took me two years to transcribe part of it and edit it and this last year and the fourth year have been about the process of editing and publishing.

Is there something in the personalities of these men who went down there that suited them for Antarctic exploration?
Even today the men and women who go down for these twelve month stints, there's a desire and a curiousness to know more, obviously,  but there's also bravery. Even today there are risks. It's still a dangerous environment and they don't go in ignorance, they're carefully selected and informed. So there's curiostiy, and love of adventure and courage.

The design of your book is beautiful, formatted like a notebook with illustrations. How much input did you have into that side of things?
The actual design, very little. The concept of his artworks being presented in the text and the selection of those all comes back to me. The designer has done a very good job of using them, the colour scheme is mine. With the first scheme we had, one of  my friends said "what is this, a book of New England knitting patterns?" The colour was just not Antarctic so that had to be changed. I suggested that they look at the Sidney Nolan paintings that he did when he went there.

The colour down there is amazing. I haven't been on the ice but I've seen it from the air. And Harrisson in his narrative is constantly telling us how amazing it is and he's an artist. He's consantly remarking how contrasting the colours are, and they all make this wonderful pattern. For instance he said he never thought he would see emerald green with cobalt blue, but that's what he saw.

Do you feel after  this project that he's come alive for you?
Absolutely, I know him  intimately- sorry Carrie! Not that way! But I feel I know how his mind works. He was a very fine human being. He was very conflicted, for instance, by the need to kill the beautiful little snow petrels to feed the sledge dogs. They couldn't get back to base if they let the dogs die and they had to kill the birds and he hated doing it. He was such a very good person, very unassuming, modest, never puffs himself up.

When he came back, and I think this epitomises the man, he writes in his diary that on the 15th March 1913, when the Aurora coame alongside the wharf at 7am, he dropped off the ship before it was tied up, he had a swag with his precious sketchbooks and notebooks, he walked up the hill and caught the tram home to Sandy Bay where he lived. He didn't wait around for a hero's welcome. He didn't see himself as a hero - he thought 'I went there to do a job, I've done it and now I'm going home to my wife and children'. That's the kind of man he was.

What are you working on next?
Like all writers I have got another book! This one in a very, very different area and I'll spend 2012 getting that published, even if I have to do it myself! 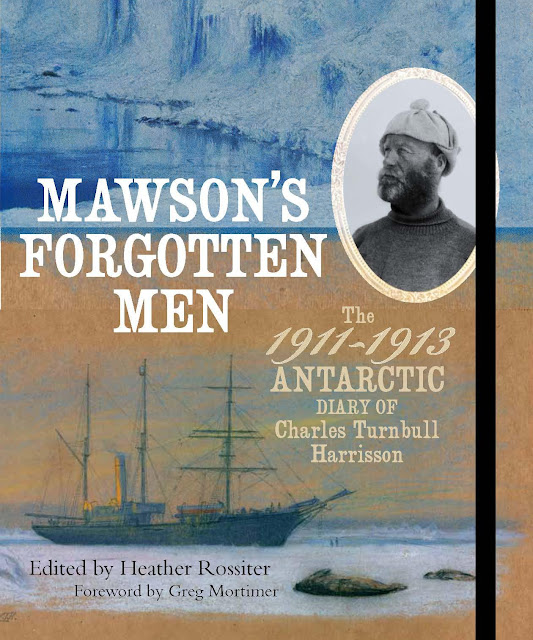