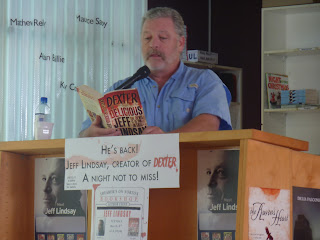 Jeff Lindsay, the author of the Dexter books, visited Shearer's last night to face a bookshop packed with some of his biggest fans. He greeted us in the traditional Australian manner: “G’day, bugger.”

He read from beginning of the latest novel, Dexter is Delicious, with a warning, “people are sometimes confused by the beginning. “Is this really a Dexter book?”" Jeff read extremely well, which isn't surprising considering he also recorded the Dexter audiobooks.

“I would be delighted to entertain your queries at this point. Didn’t that sound pompous? I love it when I do that.”

“The ‘q’ stands for question not ‘line up’. And the answer part is harder if you don’t actually have a question.” 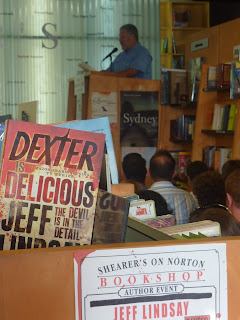 Are you happy with the Dexter TV series?
Yeah, I am. Michael C. Hall does a terrific job. I couldn’t imagine anyone else doing it now.

Where did you get the idea?
I was asked to give a talk at a Kiwanis … what’s the Australian equivalent? A Rotary event. Sitting at the head of the table, room full of real estate agents, insurance salesmen, talking with food in their mouth, fake smiles, growing sense of horror as I’m getting ready to speak and the idea just popped into my head. I don’t know where from. Serial murder? Not always a bad thing. I went home with a stack of napkins and notes.

Why Miami?
It was my home and the cops I was talking to about the series were Miami homicide cops.

Do you get pressure from producers of the show?
The producers would probably rather Dexter hit me over the head. It’s a pissing contest sometimes. (Sorry to use such language with such a distinguished audience). I sent them an email to let them know Dexter and Rita are having a baby girl. A few weeks later the TV producers said publicly Dexter and Rita are having a baby boy. But I’m deeply grateful that they’re doing a good job.

What’s your favourite part of writing?
There's a poem by Dorothy Porter. "See the mothers in the park, ugly creatures chiefly, someone must have loved them one, in the dark and briefly." I quote that just to get a laugh. But when she was asked "do you enjoy writing?" she said "I hate writing, I love having written." At the end of the day if I've written 5 or 6 pages that don't make me want to kill myself I'm happy.

What do you read?
Historical fiction, biography. I've read Patrick O'Brien's Aubrey-Maturin series about 12 times... All 18 books. I used to be a book a day sort of person. Most people read to unwind, but you often can't do that as a professional writer.

There's no real authorial influence on the way I write but I admire Wodehouse's plots and comic moments.

Do you see Dexter as a disturbed, crazy person or a normal person carrying out what's inside all of us?
I'm from Miami so it's different for us. Dexter is a homicidal psychopath, we're not except maybe at rush hour. Was that the M2 I came in on?

Dexter is deranged, disturbed but very well aware that he is. He's very well adjusted. He knows what he is and that it's different but he thinks it's better.

Do you feel you've glamourised this character? That he's so appealing but he's a psychopath?
I'm not really convinced I'm glamourising what he does. For example, my daughter is crazy about Harry Potter, she's read the books three times, she's seen all the movies but still hasn't developed magical powers. If you're not a homicidal psychopath you're not going to think this is ok. If you are you might think, it might be fun to do it that way but most psychopaths have their own way of doing things.

Are you locked in to Dexter for the next few books? Or have you another dream job?
My dream job is winning the lottery and retiring.

I'm locked into Dexter contractually for another book or two. I do have a couple of plays to write but I probably won't get to do them for a while.

First person is a great way to get inside Dexter's head but do you find it hard to convey the information you need to convey in first person?
Most of my problems come through plotting. Sometimes I over-clue and sound like Miss Marple. Other times I under-clue and it's like a bad episode of the Twilight Zone. Sometimes I cheat and use Dark Passenger insight.

Do you do a lot of research?
Yeah, a lot on the internet, which can be scary. I read a lot of books, things by FBI profilers. I also have a lot of friends who are cops, and there are psychologists in the family. I call them up and ask, "If this happened would he do that?" And they say, "Yeah, that's about right. Where did you read that?" "Oh it just seemed to right to me." Then they ask, "Can I speak to your wife for a moment?"

Have you been hanging around dead bodies to get the descriptions right?
Actually no, I don't like to put in a lot of graphic description. I try to mimic what Hemingway did in Hills Like White Elephants, creating a clear impression without being explicit.

Did you plan a series from the start?
No, Dexter is really a piss off letter to the publishing industry. Then they asked for more. But I told the story. It's done. The publisher said, "you'll think of something". It's conceptually hard to think of it as a series. 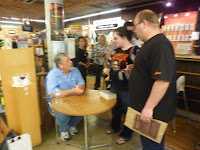 Are you concerned about the amount of plastic Dexter uses?
As myself I am but it's not high on Dexter's list of priorities. Future generations will have to worry about it but it's better than leaving an awful mess lying around.

Is there any aspect of the TV series you're not comfortable with?
I'm only up to the beginning of season 5 but so far it seems a bit maudlin, a bit sentimental. I'm told it pulls out of the nose dive later in the series though. I also didn't like season 2, where they find all the bodies in 60ft of water. It's hard to find 60ft of water in Miami, either it's Biscayne Bay which is shallow or the ocean which is 300ft deep. I understand it's for the dramatic arc of the whole season but it's stupid.

What do you think of Jennifer Carpenter as Deb?
She's a great actress. At first I thought she wasn't at all like Deb, like she struggled to capture her but she came back as a beautiful representation of Deb.

Do you have any artistic control over the series?
It varies from season to season but averaged out it's virtually nothing.

Has the show influenced your writing?
People ask that but no. When I'm writing I write from Dexter. But every so often when I'm writing Matsuoka C. S. Lee sticks his little bald head in there and steals the scene.

Does Dexter influence you?
No, there's a total disconnect. It works the other way though- if I'm worrying about income tax Dexter will be too.

Dexter is Delicious is available now from Shearer's. Autographed copies are also available.
Posted by Shearer's Books at 16:06